4 books to read from our French book club

4 books to read from our French book club 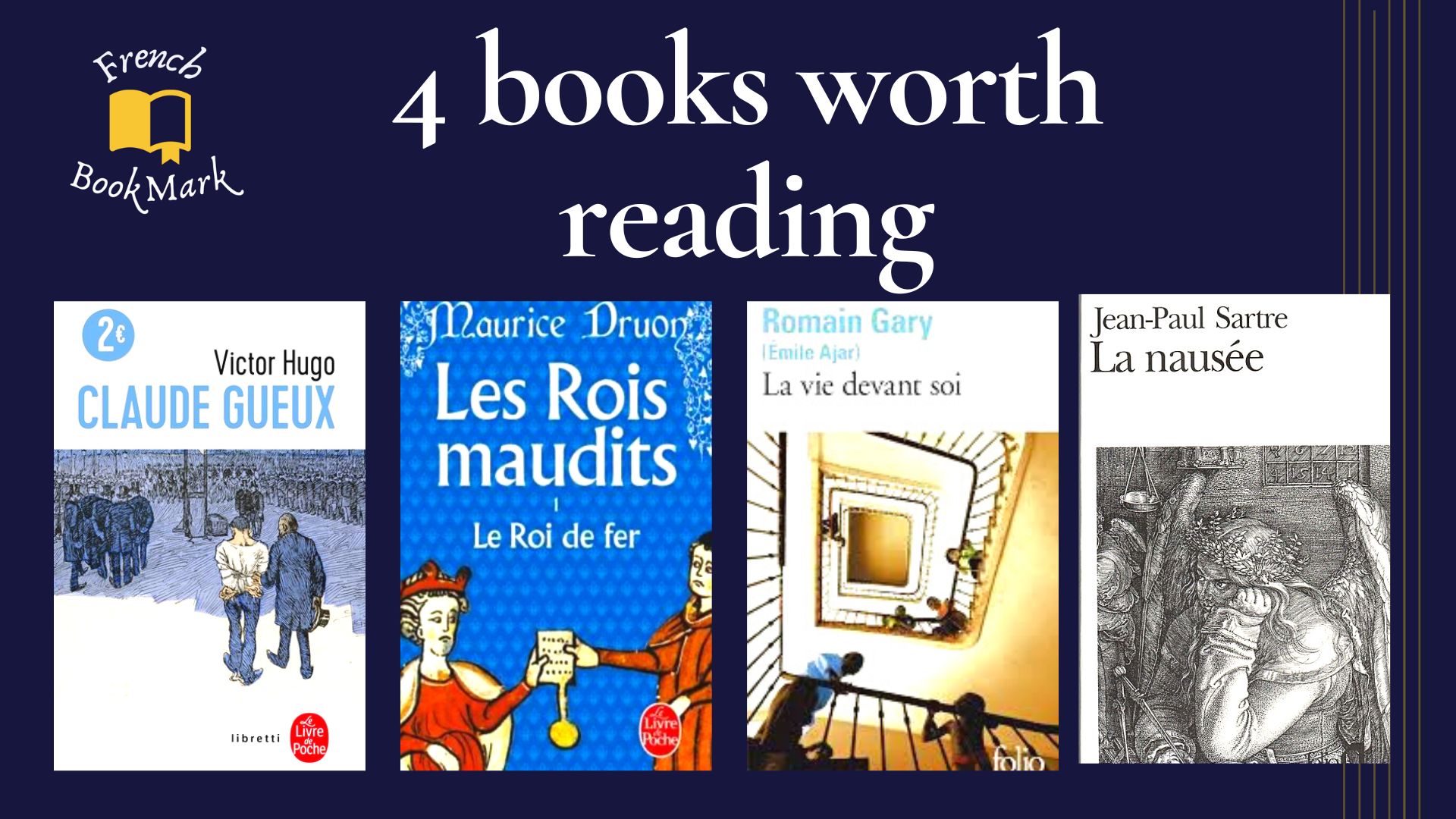 Many people find it interesting to read books while learning a new language because it allows them to immerse themselves in the language and culture. Of course, you could read books in your mother tongue language but if you’re learning French then reading books in French will help you improve your French vocabulary and grammar skills.

Here are 4 books that we read in our French book club. They were much appreciated.

The “Accursed Kings” historical saga consists of 7 tomes based on solid research and reliable sources. Maurice Druon traces the troubled period from the beginning of the 14th century to the end of the Capetian dynasty which had exercised power in the kingdom since the 10th century. France will then enter a long and bloody power struggle: the Hundred Years’ War.

Thanks to this novel you will dive into life in the 14th century: beliefs, mores, and medical practices. Different stories are to follow: the quarrels of succession within the Kingdom, the fierce struggle for the possession of the county of Artois between the formidable Mahaut of Burgundy and her nephew Robert d’Artois or the beginnings of a love story between a young and attractive Lombard banker, Guccio, and Marie, a girl of minor nobility.

The life ahead, la vie devant, of Romain Gary. This book was very pleasant to read for French learners. Momo, a little Arab boy, has been living with Madame Rosa for several years. Madame Rosa takes care of the children of prostitutes. She got attached to Momo who is no longer claimed. Madame Rosa no longer knows how to climb the stairs you have to take to get back to her apartment on the 6th floor, but Momo is there to watch over her. Her health will deteriorate but Momo will stay with her. He will grow up and become a man. This novel is a compendium of emotions and good feelings. It is ultimately the story of all these lost children, in need of love and recognition.

Victor Hugo was only 27 years old when he published this short novel whose main character has no name. We don’t know anything about his crime but we know that in a few hours he will be guillotined. Claude Gueux is a novel that invites us to share the moods of a condemned man without a future as well as the psychological torture caused. The condemned man goes through all the feelings: ranging from suffering to panic while hoping in his last moments for a miraculous royal pardon. Victor Hugo condemns the practice but also the people who pay for their place to see the condemned in their dungeon and to occupy the best place during the execution.

Nausea is above all one of Sartre‘s first works, and one of the very first existentialist manifestos. This novel is set in the city of Le Havre in the 1930s. The protagonist, Antoine Roquentin, leads an uninteresting life that takes him from Bouville to Paris, trying to write a historical book dealing with the life of the Marquis de Rollebon or even reconnecting with a woman who was once his lover. Solitary, he has far too much free time to think. He will be nauseous. The latter occurs like an epileptic seizure: certain signals make it possible to suspect its arrival, without however ever being able to be certain of the probability: Antoine Roquentin observes objects and people until he lets himself be hypnotized by them.

Do you love discussing your favorite reads with like-minded people?

Every month we discover a new book and an author. I look forward to discussing books and ideas with you in French. Join the book club now and get access to hundreds of book records. See you soon!